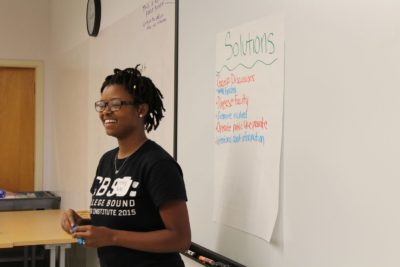 In July 2014, on the 50th anniversary of the passage of the Civil Rights Act, U.S. Secretary of Education Arne Duncan declared education “the civil rights issue of our time.” Over sixty years after Brown v. Board of Education, which ended legal segregation in public schools, education equity remains elusive. Schools often remain segregated in practice, and Black and Latino students face unequal educational opportunities.

A significant contributing factor to the racial achievement gap is the rate of Black and Latino students being suspended and expelled from school. Some are even arrested on school grounds, referred to the juvenile justice system and sent to correctional institutions.

This phenomenon highlights the broader issue of officer-involved violence directed at minorities, in particular young Black men and women. The cases of Trayvon Martin, Jordan Davis, Michael Brown and Sandra Bland have ignited a national conversation on the abuses young men and women of color endure and the debate has reached a vitriolic pitch.

Museums and other institutions grounded in historic truths – Sites of Conscience – are uniquely positioned to serve as civic spaces where all members of the community can engage in dialogue on the racial achievement gap, disproportionate levels of incarceration, school discipline of young people of color and related civil rights issues.

In October 2015, with the International Coalition of Sites of Conscience, leaders from member sites and their community partners launched a three-year initiative, From Brown v. Board to Ferguson: Fostering Dialogue on Education, Incarceration and Civil Rights, with generous support from the Institute of Museum and Library Services. Through this grant, participating sites and their community partners created dynamic public engagement programs focused on youth with the goal of fostering much-needed conversations on race, education equity and incarceration in the context of civil rights history and human rights. Additionally, the project trained and empowered young people (ages 15-25) to establish their own civic engagement programs at local museums, equipping them with current organizing strategies so that they could engage their communities beyond the program’s conclusion. To this end, the Coalition hosted a Youth Engagement Summit at the National Civil Rights Museum in Memphis, Tennessee from November 10-12, 2017. Nearly 30 young people attended the summit, receiving training and guidance from dialogue and civic engagement experts, including nationally-recognized social media activist April Reign. One participant remarked, “Having the program be led in part by teenagers changed the energy – it showed that young people are capable, skilled and knowledgeable.”

Two toolkits resulted from the three-year project, which concluded in October 2018. One contains 11 examples of inter-generational dialogue on this vital topic as designed and implemented by member sites with support from their community partners.

The second toolkit focuses on youth leadership in dialogue programming with support from community partners and is available here.

Below are blogs that were written by project participants about their programs.

The Institute of Museum and Library Services (IMLS) is celebrating its 20th Anniversary. The Institute of Museum and Library Services is the primary source of federal support for the nation’s approximately 123,000 libraries and 35,000 museums. Our mission is to inspire libraries and museums to advance innovation, lifelong learning, and cultural and civic engagement. Our grant making, policy development, and research help libraries and museums deliver valuable services that make it possible for communities and individuals to thrive. To learn more, visit www.imls.gov and follow us on Facebook, Twitter, and Instagram.