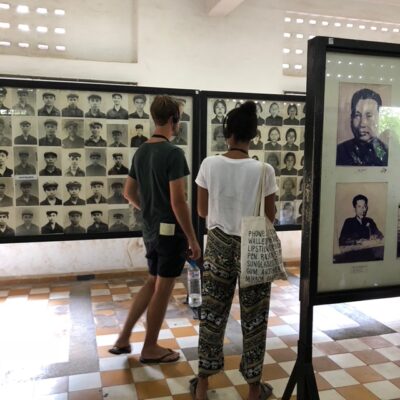 Tuol Sleng Genocide Museum is the memorial site of the S-21 interrogation and detention center of the Khmer Rouge regime. Located in the heart of Phnom Penh, it preserves evidence of a tragic period in Cambodian history with the aim of encouraging visitors to be messengers of peace.

The site was a former high school used as “Security Prison 21” by the Khmer Rouge regime from its rise to power in 1975 to its fall in 1979. An estimated 17,000 people were imprisoned there; of them, there are only 12 known survivors. The buildings at Tuol Sleng are preserved as they were left when the Khmer Rouge were driven out. The regime kept extensive records, including thousands of photographs. Several rooms of the museum are lined, floor to ceiling, with black and white photographs of prisoners who passed through the prison.