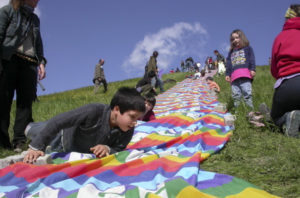 Between September 29 and October 5, 1944, 800 people in more than 100 places in the mountains outside Bologna, Italy (small villages, churches, and single houses) were killed by Nazi SS troops with the help of Italian fascist elements. The houses and churches were burnt down.

Today the land is preserved as a natural and historical park, scattered with ruins of the former village. The Peace School of Monte Sole uses the site as a basis for educational programs and summer youth camps that examine the context that made that system of terror possible, both in Monte Sole and in other places.