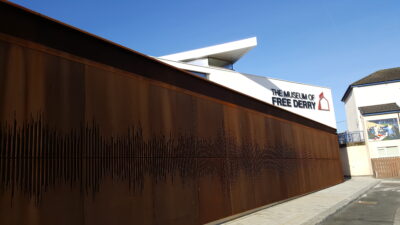 On Sunday, January 30, 1972, in an incident known as Bloody Sunday, British paratroopers killed 14 people and wounded 17 others after a peaceful civil rights march in the Bogside area of Derry.

Glenfada Park, in the heart of the Bogside, lies on the “killing line of” Bloody Sunday, where four of the 14 men murdered that day were shot directly in front of or beside a block of flats facing the parking lot. The Museum of Free Derry covers the entire period of the civil rights movement and the onset of the Troubles in Ireland leading up to the Bloody Sunday massacre and the British army invasion of Free Derry.