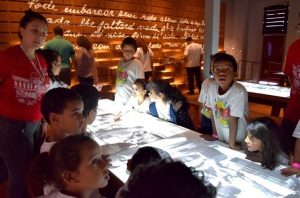 Brazil is a country known worldwide for its cultural diversity. Native people from many nations, such as the Portuguese, Spanish, Flemish, Africans of different origins, Europeans, Asians and Latin American hermanos compose our enormously rich – albeit conflict-ridden – cultural patchwork. In Brazil, a singular province was responsible for bringing more than 2.5 million immigrants by the end of the 19th and beginning of the 20th century: the state of São Paulo. Even today, São Paulo is estimated to be home to more than a million immigrants in an ever-growing flow springing from neighboring and European countries in crisis.

The Immigration Museum of São Paulo – reopened after a 4 year restoration – concentrates not only on the challenge of dealing with contemporary questions surrounding immigration and identity, but also examines its role as a museological institution in a metropolis graded by edges and distances. Among the issues the organization addresses are: