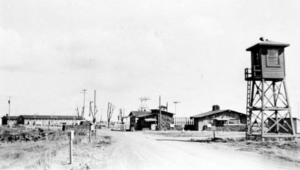 Minidoka National Historic Site is located in the western United States. It commemorates the more than 9,000 Japanese Americans who were imprisoned at the Minidoka War Relocation Center during the Second World War.

Located in the Magic Valley of south central Idaho in Jerome County, the site is in the Snake River Plain, a remote high desert area north of the Snake River. The site is administered by the National Park Service of the U.S. Department of the Interior, and was originally established as the Minidoka Internment National Monument in 2001.