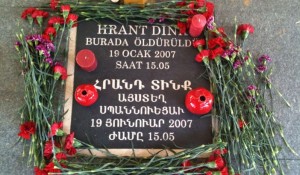 The Hrant Dink Foundation was established in 2007 in Istanbul, following the assassination of Hrant Dink, the founder of the Turkish-Armenian weekly Agos newspaper. The Foundation defines the development of a culture of dialogue, empathy, and peace as the basis of all its activities.

It aims to promote intercultural dialogue and to eliminate all forms of discrimination, to foster better communication between generations and gender equality, increase opportunities for education and dialogue, to encourage society to embrace a culture of peace and mutual understanding.

The Hrant Dink Foundation turned Agos newspaper’s former office – where Dink was assassinated on January 19, 2007 – into a site of memory. The site of memory takes its name from the article “23.5 April”, written by Hrant Dink and published in Agos on April 23, 1996.

The 23.5 Hrant Dink Site of Memory is a space that addresses and highlights the importance of the universal values embraced and championed by Hrant Dink — such as democracy, equality, justice, human rights, and freedoms — as well as building a bridge between memory and hope. The 23.5 Hrant Dink Site of Memory aims to serve as a space for remembrance, dialogue, learning, production, research, sharing, and reflection.