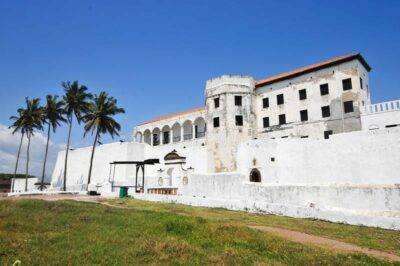 Elmina Castle is a historical site recognized by UNESCO as a World Heritage Site. It was erected by the Portuguese in 1482 as Castelo de São Jorge da Mina (St. George of the Mine Castle), also known as Castelo da Mina or simply Mina (or Feitoria da Mina), in present-day Elmina, Ghana (formerly the Gold Coast). It was the first trading post built on the Gulf of Guinea and the oldest European building in existence south of the Sahara. First established as a trade settlement, the castle later became one of the most important stops on the route of the Atlantic slave trade. The Dutch seized the fort from the Portuguese in 1637, after an unsuccessful attempt in 1596, and took over all of the Portuguese Gold Coast in 1642. The slave trade continued under the Dutch until 1814. In 1872, the Dutch Gold Coast, including the fort, became a possession of Great Britain.