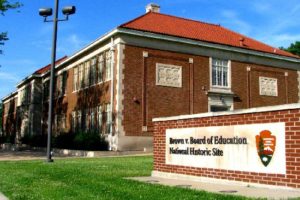 The Court had consolidated these five cases under one name, Oliver Brown et al. v. the Board of Education of Topeka. When the people agreed to be plaintiffs in the case, they never knew they would change history. They were teachers, secretaries, welders, ministers and students who simply wanted to be treated equally. Brown v. Board of Education NHS is located in the former Monroe Elementary School, one of four formerly African American-only elementary schools, and strives to preserve this history and its lessons for today.