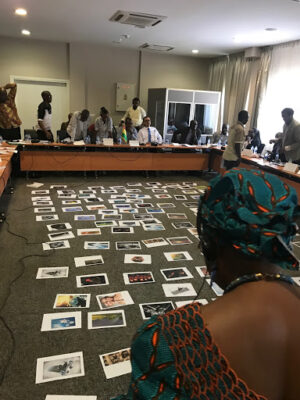 On September 28, 2009, thousands of pro-democracy protesters gathered in Conakry stadium to challenge the candidacy of military junta leader Moussa Dadis Camara, when soldiers opened fire with automatic weapons, leaving at least 157 dead and 110 women raped. Some women were forcibly taken to military camps and then enslaved for days. In its December 2009 report, the UN Commission of Inquiry called the events a “crime against humanity,” yet over ten years after the events, and years after the beginning of the investigation (2010), conducted by the Guinean Justice System, only fifteen leaders of the junta have been charged, and the justice system drags on with many questions still left unanswered.

The Association des Victimes, Parents et Amis du 28 Septembre 2009 (Association of Victims, Parents, and Friends) (AVIPA) and its partners advocate on behalf of the victims, despite the efforts undertaken by the Minister of Justice to delay any trial or accountability measures for those responsible. Three victims die each year from complications of their wounds and to this day, those responsible have not gone to court. AVIPA undertakes memorialization initiatives, provides psychological assistance to victims suffering from mental health disorders, urges the authorities to provide compensation to the victims of September 28, 2009, and advocates for trials to hold those responsible accountable.