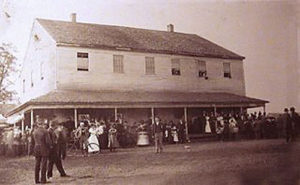 As the site of Genesee Yearly Meeting of Friends, the 1816 Farmington Quaker Meetinghouse was a national crucible for major reform movements in the nineteenth century. It stood at the crossroads – symbolically as well as geographically – of activism for African American rights, women’s rights, and Native American rights.

In February 2006, a windstorm blew off the east wall of this nationally important Meetinghouse. Responding to this urgent preservation need, concerned citizens organized a grassroots coalition to preserve and restore this Meetinghouse and to promote a series of heritage trails relating to the rights of women, African Americans, and Native Americans throughout upstate New York.