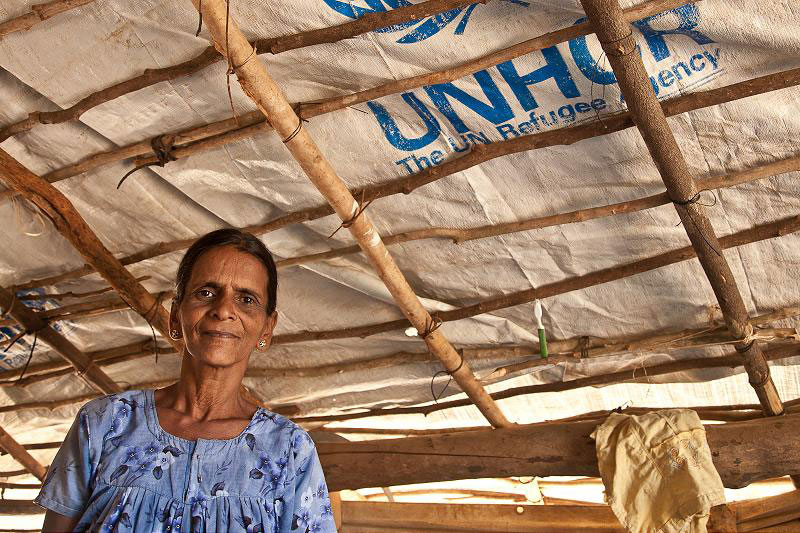 War and Motherhood in Sri Lanka

“Yes, I am going to tell you about a few things which may provoke your thinking.”

From 1983 to 2009, Sri Lanka was devastated by a civil war that pitted the Sri Lankan government and the Buddhist Sinhalese majority against the Hindu Tamil minority. Up to 100,000 people were killed in the conflict. Hundreds of thousands more were displaced. Each of them has a name and a story that deserves to be heard.

The Coalition works with communities throughout Sri Lanka to ensure that these narratives are preserved and disseminated. In the past month, we have led workshops in each region of the country, bringing people together across religious and ethnic divides to discuss their experiences and transitional needs.

To spark further dialogues on issues related to peace, justice and reconciliation, our member Herstories – an archival project of Sri Lankan mothers’ oral histories, photo-essays and artwork – provided a traveling exhibit for the workshops. Since 2012, the organization has collected nearly 300 stories from women whose lives have been ravaged by war. In honor of International Women’s Day, we would like to share one of them with you. It is written in epistolary form by an unnamed young mother from Vavuniya. To read more stories, please visit their website.

The story which I am going to describe is full of undeniable and unforgettable incidents and tells of a period of great challenges during the 1990s. Yes, I am going to tell you about a few things which may provoke your thinking. In 1990, during the peak of terrorist activities, we were so afraid to come out of our houses. Families would meet together in a house and remain there in utmost fear. There was no electricity supply at that time and we all were in the dark. What to do, our fate was such!

One day at about 6:30 p.m. a group of thugs and rogues came into the house and dragged our cousin outside the house. She was crying and shouting in agony. A man who was feeding his children in the house opposite ours heard this scream and came out of his house to get her released. She escaped from them and found refuge in our mosque. She was unconscious and her face was bleeding. The man, a father of three children, who came to save her was lying in a pool of blood with gun shot wounds. The thugs had killed him and ran away. There happened, not one or two incidents like this, but so many. One day a fight broke out between the Army and the LTTE (The Liberation Tigers of Tamil Eelam). The time was about 8:30 p.m. In fear, we converged in the mosque and the school. We could hear the sounds of the guns and shell explosions all around. We were plunged into untold fear and horror. That day could be termed as a black day and there should not be a day like that in the future.

The following day the villagers and prominent people met and decided to leave the place because our lives would be under threat if we continued to remain there. All the villagers left the place like refugees with whatever they were wearing, leaving behind most of their belongings. We all started walking with each of us carrying a shopping bag of things, and we reached Ikkirikollawa through Vavuniya. There we saw a lot of people who had come from Jaffna and Mannar as refugees. We stayed there for about a week with severe hardships, without proper food and drinking water and sanitation facilities. After two weeks, we were all taken to a place called Pamunugama in the electoral division of Kekirawa in the Anuradhapura district. Initially we were staying in a school there but later all the villagers were very helpful to us. Furthermore they had gone to the hill side to cut the required timber and poles for us to put up temporary sheds. We spent nearly three and a half years in those huts. Our children’s education was affected. After living with severe hardship in that place, we all returned to our native place in 1994.

Our prosperous and beautiful village was completely ruined. Our houses, bunkers and jungles had been completely destroyed by shell attacks. We received a small amount of money as resettlement allowance from the Government. The NGOs too provided cooking utensils and other essential things. However these were insufficient for us to live there. We did not receive any more help other than that. We are faced with so many difficulties and we continue to live here. These things I am telling you. Let me know of your experiences briefly. We shall meet again. Thanks.

Daughter of your elder sister