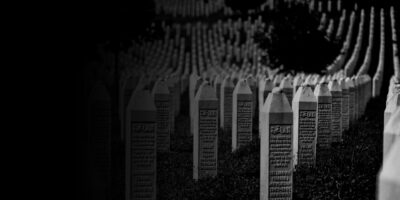 Over 8,000 Bosnian men were executed by the Bosnian Serb Army in the Eastern Bosnia and Herzegovinan enclave of Srebrenica. These killings became the single largest massacre to take place on the European continent since World War II.

Inside a former battery factory, where the Army separated families before the executions, the Srebrenica-Potocari Memorial Center & Cemetery (SPMCC) offers a space for prayer and remembrance and serves as a final resting place for many of those massacred. In the Spomen Soba (Memorial Room), visitors  hear testimonials, watch film installations, and view recovered artifacts. In the on-site cemetery, a memorial wall is inscribed with the names of the 8,372 victims and provides one of the largest open-air Muslim prayer spaces in Europe. The SPMCC dedicates its knowledge, experience, and energy to ensuring that the Srebrenica story is heard by the whole world so as to avert future genocide.