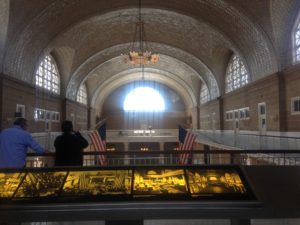 The Statue of Liberty was a gift of friendship from the people of France to the people of the United States and is a universal symbol of freedom and democracy. The Statue was dedicated on October 28, 1886; designated as a National Monument in 1924; and restored for her centennial on July 4, 1986.

As America’s premier federal immigration station for over 60 years, Ellis Island processed some 12 million immigrant steamship passengers. Today, more than 40 percent of America’s population can trace its ancestry through Ellis Island, and the museum’s exhibits focus on this shared history.