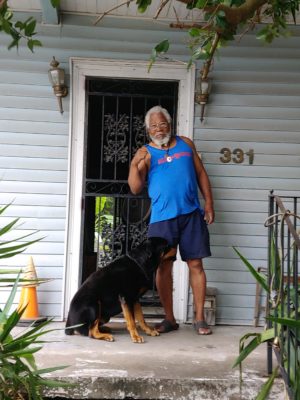 Malik Rahim joined the Black Panther Party during the Civil Rights movement and was a leader in the New Orleans Panthers by 1970. His house became the depository for the Chapter. Through the Panthers, he participated in the free breakfast program for children, political education classes, facilitation of free medical care, and neighborhood clean up and empowerment programs. Ever since, he has continued to be involved in community organizing against the death penalty, against solitary confinement on a national and international level.

In 2005, Rahim co-founded the Common Ground Collective within his house, where he still resides on Atlantic Avenue in New Orleans, Louisiana. The house and the vehicles on the property were used to house thousands of volunteers, store materials, and for the planning and execution of rescue efforts immediately following Hurricane Katrina. Rahim continues to be an activist and community leader while his house is both a memorial to past civil rights movements and current center for post-Katrina support and organizing efforts in New Orleans.