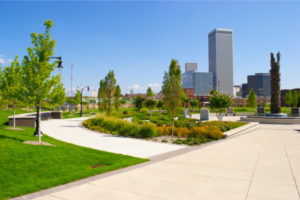 The John Hope Franklin Center for Reconciliation oversees Reconciliation Park, the long-awaited result of the 2001 Oklahoma Commission to Study the Tulsa Race Riot of 1921. The Park memorializes the Tulsa Race Riot, called the worst civic disturbance in American history. The Park also tells the story of African Americans’ role in building Oklahoma and thus begins the long-delayed rendering of the full account of Oklahoma’s history. The goal of the John Hope Franklin Center for Reconciliation is to transform the bitterness and mistrust caused by years of racial division, even violence, into a hopeful future of reconciliation and cooperation for Tulsa and the nation.