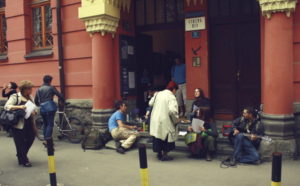 In December 2007, the Fund B92 launched an initiative to build an educational and memorial institution at the Old Fairground death camp site. Given its history, the Old Fairground site is a critical location that is ideal for a memorial educational complex. It will serve as a memorial center both for the events and history of repression after World War II, as well as for the wars waged from 1991-1999 in Serbia and the Balkans. Visitors will be introduced to documents, photos, and other archive materials related to the different conflicts that took place in the region. Fund B92 seeks to reconstruct buildings from that period as well as develop a memorial center, which will include a partial reconstruction of a World War II concentration camp. Finally, a cultural-educational center will be set up to inform the public about the world’s history of violence and intolerance through an international exchange program.