Closed in 1982, the remote and foreboding Spaç Prison once held Albania’s imminent political prisoners under the Communist regime. In this essay, Mirian Bllaci, a Program Manager at Coalition member Cultural Heritage without Borders – Albania, tells the story of the site’s revival — from a ruin to a place of reflection, where visitors learn about Spaç’s history and how to take action to ensure it is never again repeated.

After almost three decades since the fall of the Communist regime, Albania has timidly begun to come to terms with this difficult history. The recent opening of the secret police files, the growing efforts to identify bodies of the missing, and the opening of a Museum of Secret Surveillance in the capital of Tirana represent the first steps in what will be a long and painful nationwide journey to remember, understand and heal. Within this context, sites of memory like the former Spaç Prison, have taken on a particularly important role in shaping the discussion of how Albania’s traumatic past should be preserved.

Spaç Prison – the only Communist prison listed as a protected monument in Albania – was established in 1968 in the remote mountains of central Albania, and housed some of the country’s most prominent political prisoners.   Since its closure in 1982, the prison has been abandoned, looted, vandalized, politically misused and recently exposed to a dangerous cohabitation with one of the biggest mining ventures in the country.

Yet today, the remaining walls of Spaç Prison hold memories and not prisoners. Preservation of the site began in earnest in 2007 and continues to this day. Once fully activated, the ruins of the former prison will be a witness to both the atrocities of the past and the seeds of oppression that exist in society today. As a Site of Conscience, it will remind us that our silence in the face of prejudice and injustice is what erodes democracy. Just like the forces of erosion, this process can be so gradual that we may not notice until it’s too late — and democratic society has collapsed. Spaç Prison shows us that we all must be active in opposing prejudice and in promoting justice and human rights so this does not happen.

In response to the site’s degradation and broader societal efforts to preserve it, in 2014 Cultural Heritage without Borders – Albania (CHwB Albania) began the project called Sharing Stories, Shaping the Future: Dialogues for Spaç, supported by the Coalition’s Project Support Fund. The project entailed a series of visioning workshops predicated on the understanding that there is not one way to read the experience of Communism in Albania—the perspectives are as varied as the people who suffered, survived and went about their lives in many different ways. The key to interpreting and confronting that past is providing a space for these voices to tell their story. The result was a plan to turn Spaç into a place for dialogue and action, whose mission would be two-fold:

As a site that educates in a deep and experiential way, Spaç Prison is now beginning to use its traumatic past to reveal the universality of human society. As more dialogic programming is weaved into the site, it reveals how small the step is from common stereotypes to dangerous prejudices; from insults and bullying in the school yard to stones thrown against institutions or people. It shows us how quickly society can move from fear to aggression, from patriotism to xenophobia, and from mundane government bureaucracy to human enslavement. And, perhaps most importantly, Spaç shows us how this chain of prejudice and violence begins inside each of us — by our mental exclusion of those who are different, which leads to social exclusion and then finally institutional and physical exclusion. Spaç shows us how we become complicit in oppression — because crimes against humanity only need ordinary people to choose to be bystanders, hiding behind blind submission to authority, group conformity, passivity and scapegoating.

But, Spaç also shows us how even at “the worst” moments of society, strong people emerge and choose to resist. Their resistance takes a number of forms — individual or collective; spontaneous or organized; public or clandestine — that inform our civic duty today, encouraging us to show respect and humanity: to speak out, create art, preserve dignity.

In support of this vision for Spaç Prison, CHwB Albania has recently developed a full concept for the site, based on two key objectives: 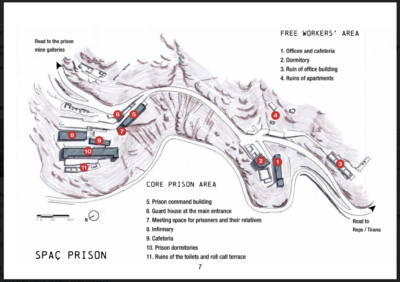 Spaç today is a place for dialogue that encourages action. The goal is for visitors to leave this place not crushed by tragedy but encouraged in their civic duty. Enlightened by the experience of ‘the worst,’ they learn how to identify and resist the seeds of oppression in order to build a more just and democratic society. They learn that taking action is more than a choice; it is a duty.

*Correction: In the original email Newsletter sent to members and friends, Mirian Bllaci should have been referred to as “he” not “she.” Our sincere apologies.