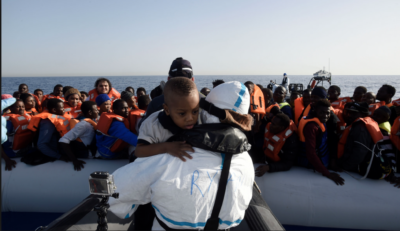 There are currently over 65 million forcibly displaced people around the world, more than at any other time since World War II. The number of people fleeing their homelands has prompted heated debate around the capacity and obligation of countries to serve as a refuge. The response of civil society and well as state leaders in these countries has varied greatly. In a nation of 330,000, for instance, 12,000 Icelanders recently called on their government to increase the government’s cap of 50 Syrian refugees by offering to personally host families, while Hungary closed its borders with Serbia and Croatia to prevent the flow of refugees across their borders. And while widespread protests against the separation of children and parents at border crossings in the United States in June 2018 led to a change in policy, 55 percent of Republicans still agree with the tactic. These varied responses among individuals and governments illuminate fears around national security, limited resources and the effects of immigration on a receiving country’s national identity.

Front Page Dialogues are designed to serve as models to help our members generate conversations about relevant issues as they emerge. As rapid response tools, they are intended to help Sites of Conscience respond to community needs in a timely manner, providing a guide for engaging visitors in dialogue and action on pressing events in real time. We encourage you to use this model to facilitate discussions on the refugee crisis.