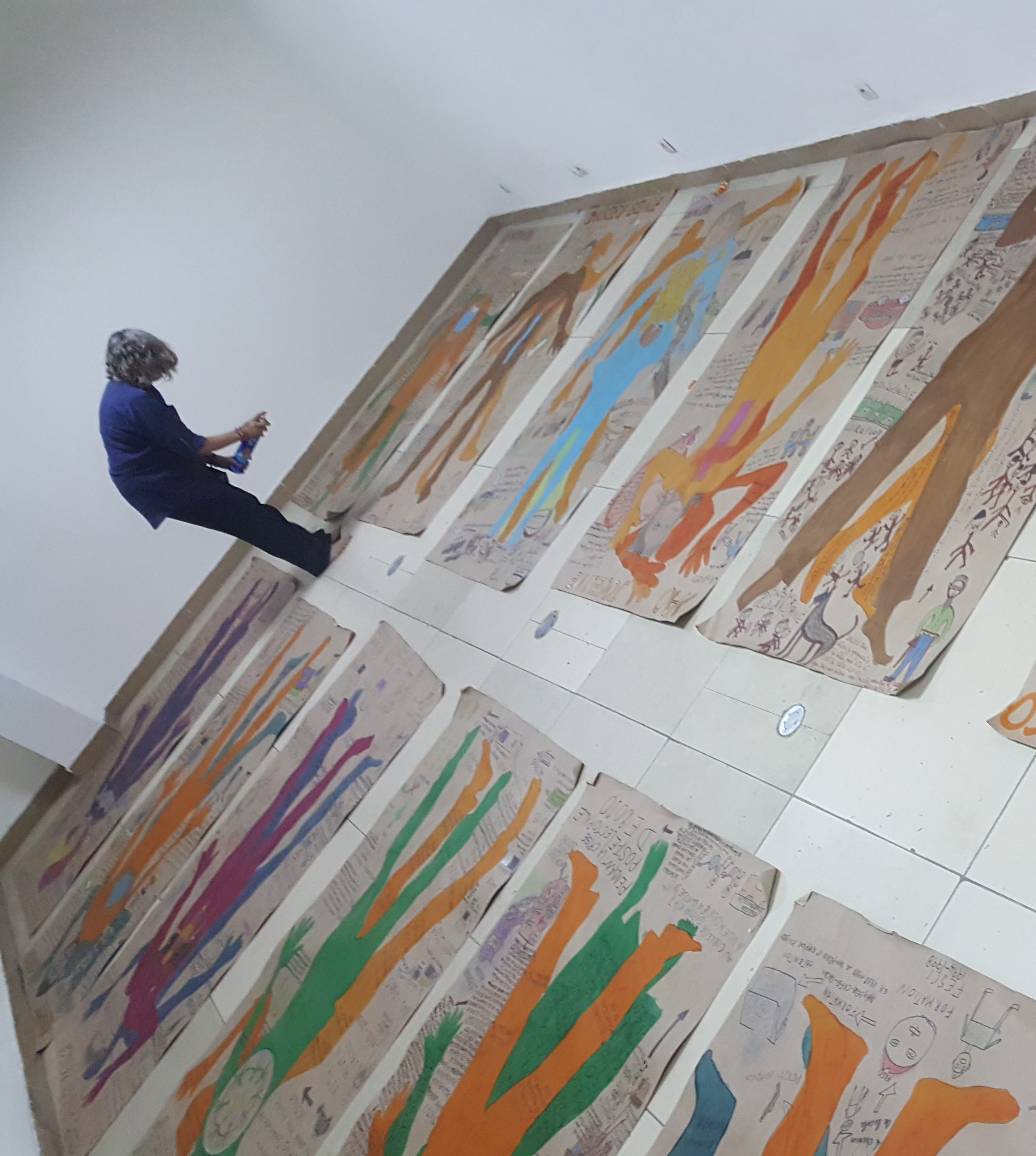 “The Very Personal Is What Changes People’s Consciousness:” An Interview with Activist Shirley Gunn

For Shirley Gunn, activism and personal stories have long gone hand in hand. Born in Cape Town in 1955, she grew up as an eyewitness to the injustices of apartheid. As a young woman, she worked as a nurse before turning to social work. “In those days nursing was a horrific experience,” she told a reporter in 2011, “because we had to keep white children and adults alive who would not have stood a chance in a black ward.” While a student, she joined the African National Congress (ANC) and later the MK, the armed wing of the ANC. As a result of these anti-apartheid activities, Gunn was arrested in 1985, detained without a trial, and held in solitary confinement for 113 days. In 1990, she was again arrested after being falsely accused of bombing the headquarters of the South African Council of Churches. Gunn was detained with her infant son in deplorable conditions. When she made a formal complaint, her son was taken from her and recordings of his weeping were used to coerce her to confess. While he was returned to her, they were soon transferred to Caledon Women’s Prison, where they spent, in Gunn’s words, 68 days in “hell and anxiety.”

When it was discovered that security forces were responsible for the bombing, Gunn filed a civil court case charging defamation and won a settlement for the trauma she and her son endured. She went on to testify about her experiences to the Truth and Reconciliation Commission in South Africa (TRC), and is now the Director of the Human Rights Media Centre, a Coalition member in South Africa that advances human rights through the collection and dissemination of victims’ narratives. She has partnered with the Coalition multiple times over the years, leading body-mapping workshops in Liberia (2010, 2012), Kenya (2012), Uganda (2016), as well as Guinea, Côte d’Ivoire and Sri Lanka (2017). Below, she talks about the power of personal stories to heal old wounds, connect people across borders and spur positive change.

Sites of Conscience place personal stories at the center of their memory work and reconciliation efforts. Your personal story is certainly remarkable. Can you speak about how it has shaped your activism?

SG: Thank you for this question. A pivotal moment for me came in 1997 at a special women’s hearing of the Truth and Reconciliation Commission (TRC) – when a part of my life story became public in my own voice. What I was not prepared for was the barrage of interest that my narrative stirred in the public domain, across media and academia. It seemed everybody was interested in their own bite, nationally and globally. I was asked questions from so many different perspectives, which required me to reflect very deeply, an exercise for which I am tremendously grateful. I had jumped into the deep end of the struggle for reparations with others – fighters and activists – who were harmed during apartheid, but this personal testimony, this reflection, helped ground me. I can thank the TRC for that. It helped me to search within myself, but also opened up other angles – for instance, I was drawn into monthly discussions organized by the Reparation and Rehabilitation Committee that explored the complexity of reparations from multiple angles: medical, spiritual, anthropological, economic, social and political. This engagement sensitized me further. As a result of these activities, I can more naturally assist others to bravely share their stories, because I have been through similar reflective and creative memory processes myself.

As we think through cross-regional collaborations, it occurs to me that as a white activist much of your early work with the African National Congress and anti-apartheid groups may have left you an outsider in your own country. How did bridging that divide, or being “the other,” enhance your work and even the training you do now?

SG: It’s important not to get lost in semantics. If you’ve taken sides in a struggle for justice, there is often a dichotomy between “us” and “them.” But who is the “other”? Are we the “other” or is the power elite the “other”? If we are the “other,” it is not as a disadvantaged group; there are numbers within the margins that you’ll never find within the elite.

What is most important to remember is that change mostly comes from pressure from the margins, from the actions of the masses, not from the elite. For this reason, I have never felt powerless in our struggle for reparations in South Africa, despite the lack of political will demonstrated by those in power in post-apartheid South Africa. I have never lost hope or felt powerless because our struggle for reparations is a larger struggle waged by the masses who had a raw deal under apartheid. That’s my short answer to that question.

More broadly, my personal experiences have helped me form bridges with others. I have worked directly with survivors in different contexts: Liberia, Kenya, South Sudan, Sri Lanka and South Africa. But I am also a victim/survivor, an identity given to me by the South African TRC, which I believe makes me a good conduit for the work I do because I’ve gone through my own experience of facing the past and having been framed, detained and tortured, and yet I struggle on…

As a veteran and former freedom fighter for the African National Congress, I am not active in party politics today, at a local level, provincially or nationally. Does that put me as an outsider? On the contrary, I believe it gives me a stronger voice. I am not tied down or compromised by party political positions. I can speak my mind on whatever platform, without censoring myself. In fact, I feel freed and liberated. So, I don’t feel like an “other” or outsider, nor do I feel powerless.

You are the Director of the Human Rights Media Centre in South Africa, which documents narratives for human rights awareness, education and activism, but you also lead survivor-based workshops throughout Africa as well as other locations such as Sri Lanka. What has this comparative experience brought to your understanding of memorialization and truth-telling projects? What can the world teach South Africa and what can South Africa teach the world?

SG: Personal life stories are the center of the work of the Human Rights Media Centre (HRMC); they are the very kernel of our work. From our opening in 2000, our focus has been on helping survivors of apartheid violence and torture deal with trauma and express their stories both visually in drawings and in writing. We also seek to raise awareness about the humiliation, degradation and harms suffered during apartheid, and the right to reparation that is sorely needed. I have the voice, however, to say our TRC process in South Africa was incomplete. In my view, the TRC ended too soon and would benefit from a “second round.” In other words, please be warned: Do not replicate South Africa’s process without thoroughly interrogating its shortfalls and making the necessary adjustments when setting up truth-telling processes in your countries. What does South Africa have to teach everybody else? That the healing process is ongoing, truth-telling is ongoing; reparations must be delivered and reconciliation is not absolute. It is defined by the previous steps.

In terms of comparative experiences, the biggest lesson that my work in other contexts has reinforced is that the most important voice to listen to is that of victims because victims will give an honest perspective. Like truth-telling, memorialization is an ongoing process. Even when memorials are created, they need to be seen as living things and change as new information – including new narratives from victims – becomes available. Many memorials that adorn our countries need to be recontextualized; all memorials pre- and post-conflict need to be retold through the lens of the oppressed.

In this way, what I have learned is that a dynamic engagement in the memory landscape is required of all of us. I do my bit. Personal stories must be a part of memorialization because often the very personal is what changes people’s consciousness. I have seen this happen, so I believe these “small” steps matter in the bigger picture. That is why HRMC remains committed to telling the individual stories that collectively tell the larger story. This is what South Africa needs and we will continue to focus our energies there.

Are there overarching, universal lessons that you find in your workshops and interactions with survivors that transcend countries and borders?

SG: Oh yes, definitely. The body can only hold so much trauma before revealing it. When we are disturbed by anxiety, depression, trauma and pain – whether physical or psychological – our bodies manifest that story. That is universal; the effects of trauma are universal. What is evident in body-mapping workshops like the one I facilitated in Colombo is that the body speaks one language and when we work together with the body as a central theme, and weave in our personal oral histories as well, the collective impact of our stories is profound. If we were to put all these works, these beautiful stories in one huge gallery, it would resonate a voluminous global story. The stories complete the dots and advocate for the right to reparation and justice, shining a beacon of light on the journey ahead to reconciliation.

Finally, has helping others navigate and come to terms with their traumas played a role in helping you do the same with yours?

SG: It is always healing to find meaning in one’s life, to discover that one’s difficult life experiences were not in vain. Working in different contexts and sharing experiences opens up people; it makes participants feel safe to open up. Since I have worked with survivors for so many years, and because of my own experiences, I have developed a resilience for painful stories. I do not get knocked off my feet. I’m able to hold people in those dark, dark moments of a workshop, but I always, always walk away having learned something.