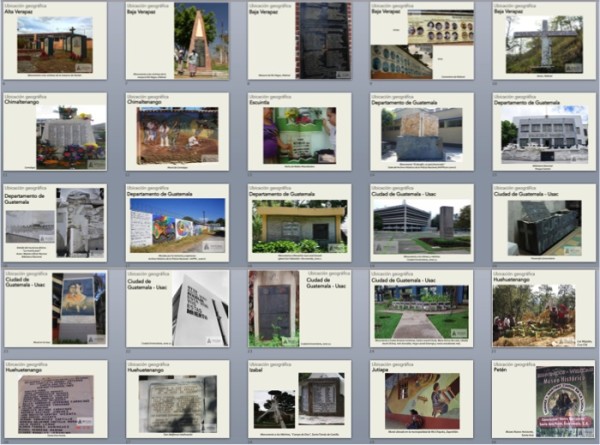 The Memory Map is an initiative by the Memorial para la Concordia – MPC (Memorial for Harmony) – consisting of a registry of sites of memory dedicated to the victims of the Internal Armed Conflict (CAI) in Guatemala (1960-1996). The Memory Map’s goal is to record all types of monuments dedicated to the memory of CAI victims. 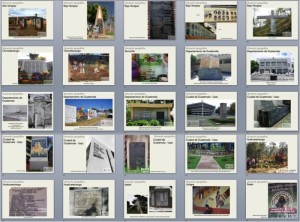 The registry includes plaques, intersections, tombs, mausoleums, altars, memory museums, murals, and monuments that seek to honor and dignify victims of the CAI, regardless of who was responsible for the events.

The Map seeks to add to the awareness of what happened, as a way of recovering Guatemalan historical memory, specifically of the events of the Internal Armed Conflict, which left approximately 200,000 victims throughout the country, including 45,000 disappeared. It seeks to display the varying expressions of individual and collective memory, allowing for information about each site to be shared so that it can be known inside and outside the country.

How does it work?

The Map is a webpage about sites of memory, an easily accessible, interactive page where one can search for these sites according to different criteria. The starting point is a photograph of a memory site from anywhere in the country: streets, plazas, cemeteries, churches, schools and universities, etc. There are also some chapels and memory museums. From the initial photo, or from the one selected to identify the site, other pieces of information in various formats are aggregated: more photos, text, videos, testimonials, reports, etc.

Search criteria for the Map’s user are as follows: names of victims to whom the monument is dedicated; period of government and event dates; geographical location of the monument; linguistic community the victims belonged to; type of human rights violation, etc.

The Map is in a state of constant movement and updating. It involves collaboration of volunteers

working continuously on the locating and documentation of memory sites. It also lets the general public propose new sites of memory to be incorporated into the Map, with the goal of involving Guatemalan society in knowing the truth and recognizing victims throughout the country, in order to spread awareness of events as the basis for non-repetition.

The Memorial para la Concordia puts together various kinds of panels and conferences based on the monuments identified in the Memory Map. When a monument for an indigenous community is involved, victims’ relatives or survivors are encouraged to tell, directly to the youth in their community, about the events the monument refers to, just as they remember it.

At other times, particularly at the University of San Carlos of Guatemala, the only public university in the country to be repressed on numerous occasions,

where many plaques for students and instructors who were subdued during the CAI can be found, we invite victims’ relatives to tell of their experiences to current university students, with the goal of directly communicating the story of these events to younger generations.

These gatherings help establish the existence of a relationship between sites of memory and the community in which they are located, so as to contribute to strengthening the link between the site and the victims, relatives, or survivors.

The Map connects the past and present so that people can understand the value of historical memory and its relationship to the country’s current situation. It also lets knowledge about the CAI in Guatemala reach different populations both in the interior of the country and in the City.