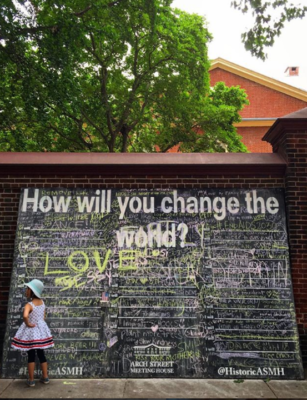 Arch Street Meeting House is a hub of Quaker thought, inspiration, and action and was designated as a National Historic Landmark in 2011.  Built in 1804, Arch Street Meeting House reflects Quaker principles of simplicity and equality.  The worship space is little changed after more than two centuries of continuous use.  It is a tourist destination and an active place of worship that supports social justice work by providing gathering space for Quaker groups and non-profits.

The property is home to the first burial ground established in the city of Philadelphia. Although the plot was officially given to Quakers by William Penn in 1701, burials had been taking place since as early as 1683.  According to reports, here, Quakers were buried alongside “Indians, Blacks and strangers.”

Tours, exhibits, and programs allow visitors to explore the Quaker tradition of peace, equality, and justice through diverse stories of principle-led Quaker action through the centuries.