Digital Mapping and Documentation in the Middle East and North Africa 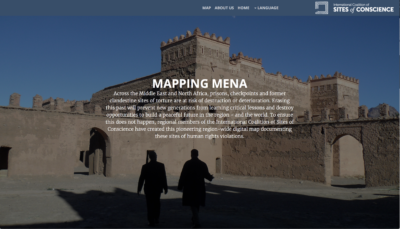 Throughout the Middle East and North Africa (MENA), ongoing conflict and repressive regimes have made it extremely difficult for many communities to account for – or even acknowledge – injustices and human rights violations committed by state and non-state actors in recent years. In particular, prisons, and former clandestine sites of torture are at risk of destruction or deterioration as a result of concerted efforts on the part of authoritarian regimes to deny or rewrite this history.

To ensure that the experiences of those who were detained at such sites are not lost, the International Coalition of Sites of Conscience (ICSC), alongside its members in the region, developed this digital map to document and share the stories and history of human rights abuses at sites across MENA.

The sites documented are:

The map includes victim testimonies, media reports, and visual material that can serve as key instruments to engage communities across the region in promoting a rights-based society through the lens of memory by documenting sites at which systematic human rights violations occurred.

The collaborative nature of this project – including over 14 ICSC members in 8 countries – reflects the fact that these issues are regional problems and require regional solutions. Across the region, the ability to grapple with historical memory, in particular, is crippled by a lack of security, a long history of political systems that preclude civic participation, and a tendency to silence those who wish to speak about contested histories. This project is a contribution to ending that silence. View the map here.

This project is made possible by funding from Robert Bosch Stiftung.