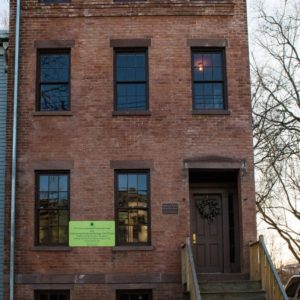 Stephen and Harriet Myers were the point people in Albany regarding the Underground Railroad in the 1850s. While they lived at a variety of buildings in Arbor Hill in the 1850s, this is the only residence that still stands. The Vigilance Committee Flier, along with other historical records document that this house was a headquarters for Underground Railroad activity in the mid-1850s.

The Underground Railroad History Project of the Capital Region purchased the building in 2004. Volunteers have worked to restore the house back to what it was 1850s and make this location a historic site where the community can learn about the Underground Railroad. Today, the Stephen and Harriet Myers Residence hopes to be an agent of change for the arc of justice, and empower the social justice voices of those who have been silenced. Through programming and exhibits, the Residence relates the legacy of the institution of slavery to contemporary justice issues.