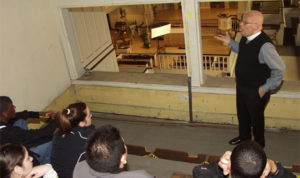 The St. Augustine’s Project, a non-profit organization run primarily by volunteers, dedicates itself to the restoration and preservation of the Slave Galleries at St. Augustine’s Church.

Located at 290 Henry Street on the Lower East Side of Manhattan and erected in 1828,  St. Augustine’s Church,  the oldest building on the block, gained landmark status more than a decade ago.  The Slave Galleries are two rooms hidden in the upper reaches of the church, designed in a harsh era of racial segregation during the decline of slavery in New York.  They were rooms, historians believe, in which African Americans were made to sit or stand during religious service.

Unique artifacts of early New York, St. Augustine’s Slave Galleries mirror 19th century life on the Lower East Side and its African American community. The St. Augustine’s Project is committed to making these spaces available to the public for visits and reflection.