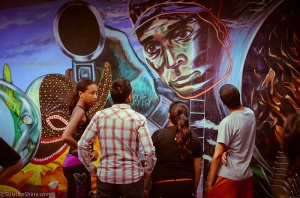 Established in 1976, the Latino Cultural Center (LCC) was the first cultural center at the University of Illinois at Chicago (UIC). The center was born out of a mid-1970s movement which also sparked the emergence of the Latin American and Latino Studies Program in 1974 and the Latin American Recruitment and Educational Services Program in 1975. The LCC emerged as the third pillar of this movement thanks to visionary Latina/o students, faculty, staff, and community members, who fought tirelessly for a cultural center to support the academic growth of the increasing Latina/o student population on campus. The LCC was named after the late Rafael Cintrón Ortiz, a Puerto Rican professor who unconditionally supported the creation of the center and was an inspirational figure to students on campus.