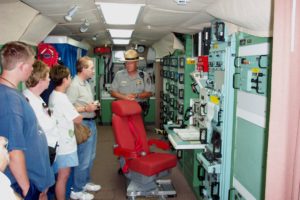 Preserving the last remaining Minuteman II intercontinental ballistic missile Site in the upper Great Plains, the Site interprets the deterrent value of America’s nuclear defense during the Cold War and commemorates the people and events during this key period of American history. Built in 1963, the launch facility, Delta 9, displays a missile in its underground silo. Eleven miles away, the launch control facility, Delta 1, appears as it did when President George H. W. Bush ordered the stand-down of these nuclear forces following the signing of the Strategic Arms Reduction Treaty in the fall of 1991.