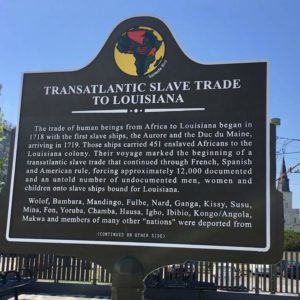 Middle Passage Ceremonies and Port Markers Project, Inc. (MPCPMP) provides a means for individuals and communities to formally honor and remember the millions of Africans who died and those who survived the transatlantic voyage known as the Middle Passage. This Project is designed to incorporate the local history of African captives’ enslavement and their contributions. We wish to affirm the humanity of all people.

The Project addresses the humanitarian issues of the Atlantic Ocean as the burial place of two to six million Africans who represented hundreds of ethnic groups during more than 350 of captive human trade. It also commemorates the ten million who survived the Middle Passage. This initiative, based upon the descendant community’s participation, assists in conducting an ancestral remembrance ceremony and installing a historic marker at each Middle Passage location where persons can visit to acknowledge African ancestors and this history. The Project, at each documented Middle Passage site, identifies and coordinates with institutions, organizations, and persons having an interest and/or record of involvement in African American history. The UNESCO Slave Route Project named 31 Middle Passage locations in the United States as Sites of Memory in December 2018 working with MPCPMP.