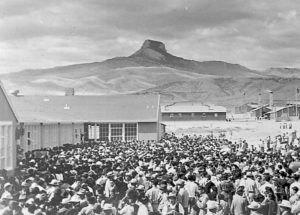 The Heart Mountain Wyoming – Annie E. Casey Foundation was formed in 1996 to preserve the site that represents a period in U.S. history following the bombing of Pearl Harbor when 120,000 persons of Japanese ancestry, two-thirds of them American-born citizens, were deprived of due process and forced to leave their homes and livelihoods. At capacity, 10,767 persons of Japanese ancestry occupied the internment camp, but as many as 14,000 were held at Heart Mountain during the three years it was in operation. Located between the towns of Powell and Cody, the Wyoming location was designated as a National Historical Landmark in 2007.

The Foundation Program Committee is focused on creating educational exhibits and historical content that will resonate in today’s world.