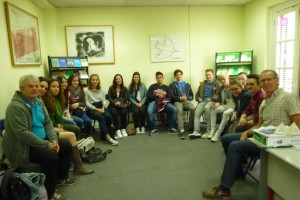 Gernika Gogoratuz is a Peace Research Centre created in 1987 by unanimous decision of the Basque Parliament, coinciding with the 50th anniversary of the bombing of Gernika. The Centre conducts peace-building activities in the areas of research, training, information dissemination, and civic engagement in order to strengthen peace-building networks and to make Gernika a global reference on peace. The Peace Research Centre is supported by the Gernika Gogoratuz Foundation, consisting of the municipality of Gernika-Lumo; the Basque Government branches of Culture, Justice, Education, Universities, and Research; University of the Basque Country; University of Deusto; University of Mondragón; and the Gernika Gogoratuz Association, which manages the activities of the Centre and guarantees its independence.