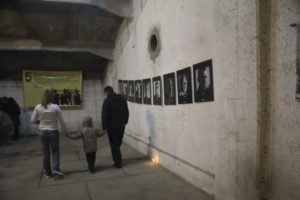 In the aftermath of the September 1973 coup d’état that overthrew the Government of Chilean President Salvador Allende, the National Stadium of Santiago (Estadio Nacional) became the largest “concentration camp” in Chile. It is estimated that over 40,000 people spent time in Estadio Nacional during the junta regime. The Regional Metropolitan Association of Former Political Prisoners works to preserve Estadio Nacional and its historical memory.