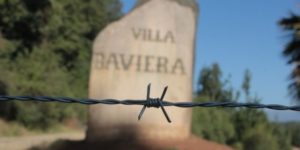 Colonia Dignidad [Dignity Colony], now called Villa Baviera [Bavarian Village], is a piece of land in Parral, Chile inhabited by Germans since 1961. It is the site of a former commune whose leaders committed numerous offenses against society, their own settlers, and humanity – both independently and in collaboration with the military dictatorship that ruled Chile from 1973 to 1990. To date, despite compelling legal evidence, none of the leaders have been sentenced to prison for their role in the kidnapping, torture, murder, burial, exhumation, and extermination of hundreds of opponents of the dictatorship, at least a hundred of whom are disappeared prisoners.

While the land is privately owned and still has not been recovered to be made into a site of memory, the site became a national monument in March 2016, which ensures preservation – a vital step in the establishment of Colonia Dignidad as a Site of Conscience. Asociación por la Memoria y los Derechos Humanos Colonia Dignidad [Association for Memory and Human Rights in Dignity Colony] strives to contribute to awareness, building, and sharing of this vital part of Chilean history.