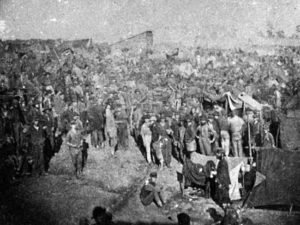 The site is an iconic reminder of the horrors of Civil War prisons. It was commanded by Captain Henry Wirz, who was tried and executed after the war for war crimes. It was overcrowded to four times its capacity, with an inadequate water supply, inadequate food rations, and unsanitary conditions. Of the approximately 45,000 Union prisoners held at Camp Sumter during the war, nearly 13,000 died. The chief causes of death were scurvy, diarrhea, and dysentery. Friends provided care, food, and moral support for others in their social network, which helped prisoners survive.