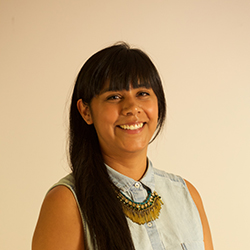 As Global Networks Program Manager, Julieta Cuéllar supports global exchange and learning as well as the development and implementation of global programs for the Coalition’s members around the world. Julieta has worked at the Coalition since 2012, as Development Associate and Development Manager. Before joining the Coalition, Julieta interned at Freedom House in New York where she worked on Nations in Transit, a publication focused on democratization in Eastern Europe and the former Soviet Union. Julieta first gained experience in memorialization and transitional justice while studying in Serbia and visiting Sites of Conscience in the Balkan region. She also interned at the Youth Initiative for Human Rights in Serbia, where she worked on the campaign to create a regional truth commission in the Balkans (RECOM). Julieta is a graduate of the University of Texas at Austin, where she earned a B.A. in Political Science and Eastern European studies. She also attended the Institut d’études politiques de Paris (Science Po) and the School of International Training’s Peace and Conflict Studies in the Balkans program.