To build upon the skills gained during the Coalition’s 2021 Global Workshop, “Embracing Religious Diversity,” seven Sites of Conscience were awarded grants by the Coalition to partner with youth and faith-based actors in their communities to create comic books and implement community engagement activities that promote religious diversity and freedom, as well as enhance the participation of faith-based actors in transitional justice initiatives.

Intended for general audiences and youth in particular, the grants – collectively titled, “Inter-Religious Understanding Through Graphic Arts” – offer concise and accessible stories that assist communities in identifying how religious doctrines, traditions, and norms have been used to encourage religious or faith-based discrimination and violence, and how an appreciation for religious diversity can lead to more peaceful futures. These projects also help audiences begin to understand that while violent conflict is regularly expressed in religious terms, in actuality related human rights violations often have far more to do with economic, socio-cultural, and political factors than with theological differences.

Below are the outcomes of the seven community engagement grants. 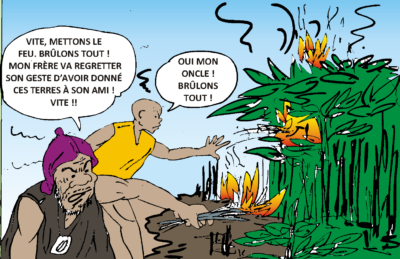 “Leave the Land of Our Ancestors!” depicts why the instrumentalization of youth in Faith or Religious Belief (FoRB) violations in southeast Guinea must cease while also promoting respect for religious freedom and its role in peace-building. The story reminds us that no one has the right to attack places of worship that serve as a refuge for communities regardless of race, gender and origin. This comic book is available in French. 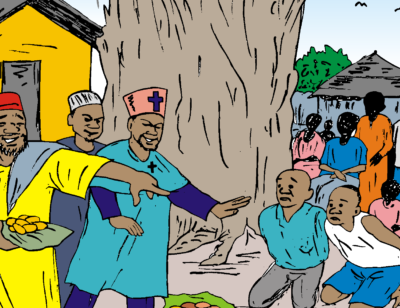 “You Don’t Like My Political Leader, so You Won’t Pray in Our Mosque!” reveals how political manipulation often leads to Faith or Religious Belief (FoRB) violations and tensions and why the management of these manipulations is imperative to the preservation of peace among citizens who have lived for several decades and have values in common. This comic book is available in French. 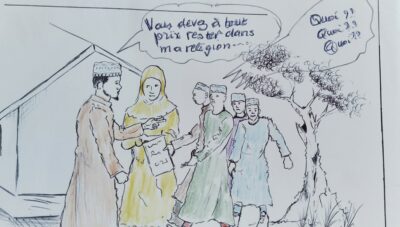 “Allow Me to Make My Choice” tells the story of young Issa, whose father has forced all members of their family to adopt his religion. After a disagreement that leads to him being shunned from his family, Issa gets into an accident that leaves him permanently disabled. This story is a lesson on the harmful outcomes of Faith or Religious Belief (FoRB) disputes and tensions as well as the importance of allowing others to make their own choices. This comic book is available in French. 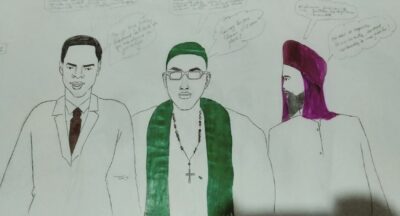 “The Last Incident” tells the story of a pastor and Sheikh who enter into a public dispute over religion. The disagreement catches the attention of other local religious leaders who condemn the two for their harmful behavior. The men reunite and decide their dispute would be the last religious incident to take place. This story shows us the importance of dialogue, inter-religious understanding and the beauty of community. This comic book is available in French.

Institute for Development of Freedom of Information, Georgia 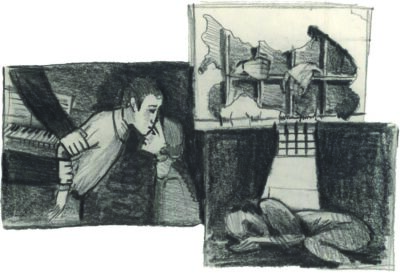 “My Graphic Story: Soviet Repressions in Adjara through Comic Books” shares five narratives of victims of Soviet repression in the country of Georgia. The illustrations were created by pupils of the Batumi St. Matata Apostle Boarding School under the direction of the Institute for Development of Freedom of Information. The attached comic is available in Georgian with translations into English. 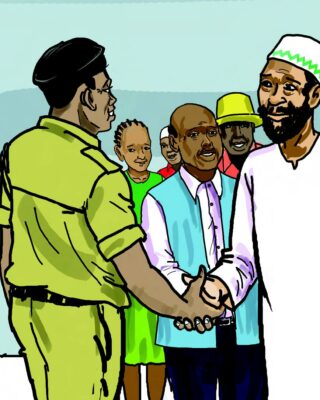 “The Brother’s Keeper” tells the story of a Muslim cleric who is accused of terrorism by a local police officer. After a human rights lawyer hears of this discrimination, he decides to take a stand and defend the cleric and local Muslim community as a whole. This story sheds light on the systemic mistreatment that Muslims continue to face today as well as the importance of standing up for what is right. 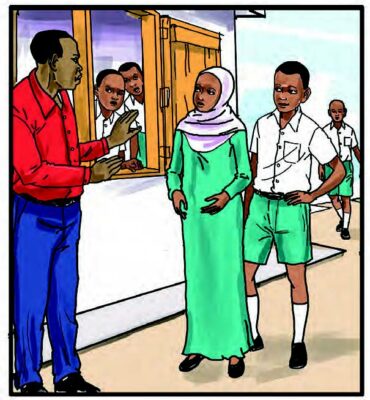 “My Right Is Not Your Decision: Respect It” tells the story of a female Muslim student who is denied entry to an exam because of her Hijab. After a teacher directs her to remove it, in an attempt to prove that she isn’t cheating, the other students decide that unless their fellow student is allowed to take her exams, they would abandon theirs as an act of solidarity. This story depicts one of the most common acts of Islamophobia and shows us that freedom of religion will not be protected unless we stand together. 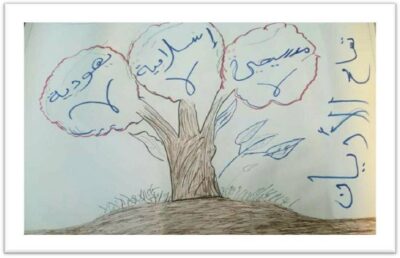 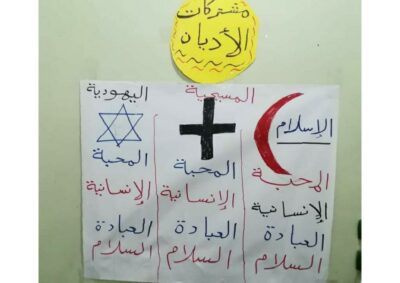 “We Are All Humans” illustrates the common values shared by many religions by advocating for tolerance and upholding the values of love and peace by depicting places of worship, people embracing one another, and messages of peace. 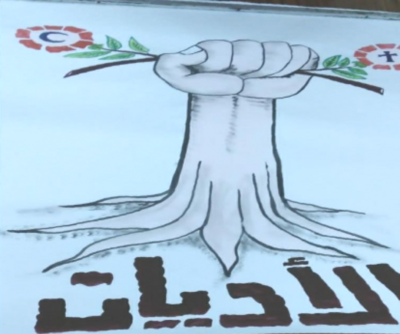 “In the Difference of Life” shows how religious coexistence is only achieved by positively accepting different cultures and beliefs, even when they are not similar to what one practices. 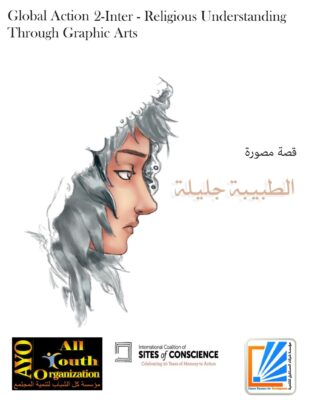 “Doctor Jalila” tells the story of Jalila, a celebrated Yemeni doctor facing religious discrimination in the form of rumors led by Dr. Emad, a colleague jealous of her success. After she dies from the COVID-19 virus, Doctor Jalila’s colleagues deal with the heavy loss by admitting to their biases against her. This story is a lesson on how inter-religious understanding can help alleviate tensions caused by socio-cultural differences. 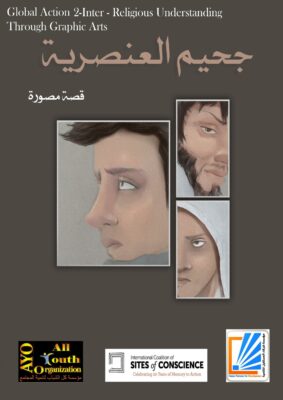 “Summary of the Story of the Inferno of Extremism” tells the story of a man who, as a child, learned of hatred, fanaticism, and extremism through religious councils. After being imprisoned for murder, he meets another man facing similar charges and is able to confront the misconceptions he learned during his childhood. Upon his release, he seeks forgiveness and works to spread coexistence and love for all. This story shows us the violent outcomes of religious intolerance and the importance of inter-religious understanding for peaceful coexistence. 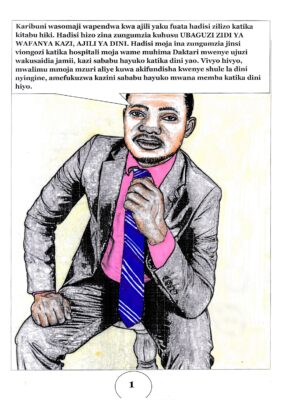 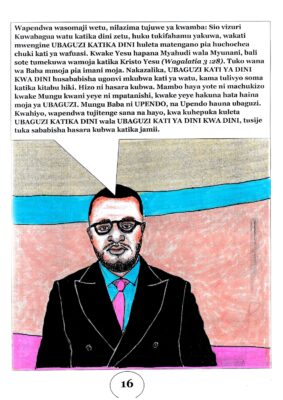