From 1968 until 1998, Northern Ireland was involved in a brutal conflict commonly known as “The Troubles” – dividing those who felt the country should remain part of the primarily Protestant United Kingdom and those who felt it should join the mostly Catholic Republic of Ireland. While a peace accord was signed in 1998, the Troubles left over 3500 dead and Northern Ireland remains in many ways a divided society. There are more so-called “peace walls” – border barriers in Northern Ireland separating Catholic and Protestant communities – now than before the accord, and several violent incidents have occurred in the past year alone.

Diversity Challenges, a Coalition member since 2008, confronts this persistent divide in and around Northern Ireland through storytelling and oral history projects. Their 2016 PSF grant “Voices from the Vault” collects stories from former officers in two police forces on either side of the conflict. Here, the Coalition speaks with Coordinator Will Glendinning about the logistics of bringing warring factions together.

Much of your work in Northern Ireland focuses on collecting the oral histories of law enforcement officials from both sides of the conflict. What value do oral histories provide that more traditional historical documents might not? And how are they a good first step in helping communities broach contentious histories?

Oral history is increasingly recognized as a legitimate means of documenting history because it gives you a background picture – a mood, if you will. It shows how people were personally affected by issues, which doesn’t always come across in other documents.

For our projects, they were particularly useful since those who serve the state are less likely to share their personal stories. There is often a culture of secrecy around law enforcement. This could be for personal security reasons – but often you didn’t even tell your own children what exactly you did. The answer was, “A civil servant.” For us, it was important that these stories were heard. If not, you get a more one-sided view of the conflict from those who are prepared to talk, and who are more likely to be non-state participants. 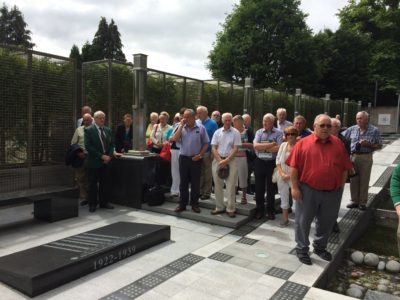 How did you get the officers to open up, to agree to speak?

The biggest thing was developing partnerships and networks with police officers so that they trusted us and we trusted them. We also trained them (former police officers) to be the ones to go out and collect the stories. People are much more likely to tell a story to one of their own.

Your organization also brings officers from different sides of the conflict in Northern Ireland together in more direct ways – through dialogues and seminars. How do you facilitate these meetings?

It was very often the case that while officers from either of the conflict worked together in a sort of integrated fashion, they had not necessarily met one another. We have tried to change this. No matter the setting, the first critical step when we bring people together is to be very honest about who they are going to meet. We never want to create a situation in which anyone is surprised by their surroundings. That does not create trust. 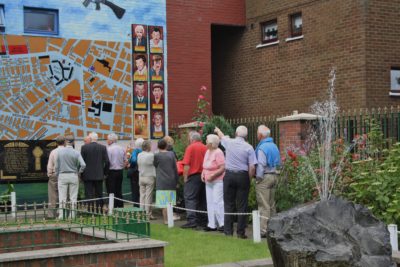 Some people still do not want to meet or engage in dialogue with someone who comes from “the other side.” While they might pass pleasantries, they do not want to engage. So we have to respect that, and their right to say, “I’m not taking part in this.”

But one of the learning points came from a dialogue event we did at an event in Belfast – a platform that brought together a former police officer, a current police officer, myself and a former Republican hunger striker. A number of former police officers came up to me afterward to say it was the first time they had seen such a dialogue. At first they had thought it odd, but because they knew me and the former officer who was on the panel, it became ok. Seeing us, knowing us, helped them feel stronger and more capable of participating in a dialogue in the future. Changing perspectives, opening minds, takes time and is all about trust.

What steps can you recommend facilitators take if people are hesitant to listen to another side?

One of the biggest difficulties in these discussions is that the “opposing person” is not seen as being a full human being. Therefore, the idea that they can be a father, mother, brother, husband or wife is often alien.

One technique I’ve seen that navigated around this effectively was to show a group videos of people doing things – but without revealing which side of the conflict the people in the videos are on. 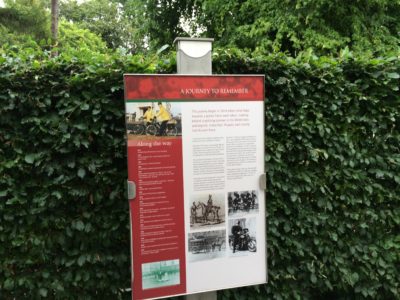 For instance, you could show the group a video of a person attending a funeral. At these moments, people’s humanity is allowed to come out without being squashed by any prejudice the viewer may have. At the end of the videos, a discussion about the nature of empathy occurred and only then were the identities revealed.

The point was very clear: if you had known the history of the person in the video beforehand you wouldn’t have listened. You would have already shut out this person as a bad person whose story is also bad. You would not have seen the human being – a person with a life, loves, with emotions – but only the uniform standing in front of you. Our goal was to get people beyond the uniform.

Drama can also be an effective tool. Sometimes, we “plant” actors in the audiences at various dialogue events. One will stand up at the beginning of the discussion and offer some sort of criticism – perhaps about how engaging with the other side in such a way is tantamount to engaging with murderers. Then another actor will offer a viewpoint. A discussion ensues and then after awhile their true identities are revealed. It is a great way to break the ice and create an atmosphere that acknowledges the difficulty of having discussions around contentious issues.

Is the point of dialogue to forget which side you are on? Is the goal to wash away difference?

It’s not to wash away difference. It is to help someone say, “I know what my story is, but now I know another person’s story. I may not agree with it, but it is theirs.” It is about recognizing that there are other stories, and that these issues are not black and white, but various shades of gray. If people reach a stage where there is true reconciliation, all the better. But if we can at least get people to agree to differ in a peaceful and respectful manner, then that is an incredible improvement.