Historians have many responsibilities. One of the more important is to write histories of new subjects, either regarding more recent events or older but previously ignored subjects. However, an equally important responsibility is to revisit well-known histories, peoples, events, and places, considering them afresh. Because history is never stable, it is the responsibility of all those involved in public history  – curators, interpreters, historians, preservationists – to ensure that history does not stale.

But how do we do this? How do we pick which subjects to revisit? Let me answer this question with a story from my hometown. Like so many southern American towns, Charlottesville, Virginia, installed grand monuments in four of its public parks in the early years of the 20th century. Equestrian statues of Robert E. Lee and Stonewall Jackson signaled our membership in the Confederate States of America, who rebelled against the Union in order to defend the institution of slavery. Monuments to Lewis and Clark (with a crouching Sacajawea), and George Rogers Clark mark our town’s participation in the exploration and eventual exploitation and domination of the Native American lands of the American West. When erected more than a century ago, all four were widely celebrated by white Charlottesville.  But now, many of our citizens – minorities and whites  – are vocal about the offensive messaging of these monuments. Still others from our community – almost exclusively white – have come to rally in defense of these statues, arguing for their historical significance. What differentiates these groups? The history they read. 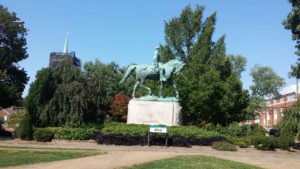 Those arguing for the preservation of these statues have remained committed to a viewpoint informed by an antiquated body of well-researched and well-argued history. Those who are discontented have ventured into more recent, revisionist histories that begin to engage the same subjects but through a different lens. These histories work to position the enslaved persons of the southern plantation as persons whose dignity was assaulted, who struggled against extraordinary odds to raise children – just to survive. They also work to better understand Native American claims to land that did not conform to the legal systems of ownership brought by Europeans, but were legitimate nonetheless. In the context of these statues of Civil War generals and western explorers, our town has begun a conversation about understanding these monuments as products of the Jim Crow South, one in which black and white segregation was instantiated and in which white social and political authority was sustained at every turn. It is helpful for us to understand that densely occupied black housing was torn down to make room for these public monuments, located in broad open squares downtown. This important past implicates these objects not just as a product of the Jim Crow South, but as an actor in this political landscape.

Fine, but how do we do this? How do we write new histories that engage our present? We listen to our neighbors. Our neighbors have ideas and concerns, and many of those concerns have histories. Their concerns should be our concerns, especially across lines of difference.

Louis Nelson, a member of the Scientific Committee for the revitalization of Maison des Esclaves, is Professor of Architectural History and the Associate Dean in the School of Architecture at the University of Virginia, a member of the Coalition. He is a specialist in the built environments of the early modern Atlantic world, with published work on the American South, the Caribbean, and West Africa. His current research engages the spaces of enslavement in West Africa and in the Americas, working to document and interpret the buildings and landscapes that shaped the transatlantic slave trade. He has a second collaborative project working to understand the University of Virginia as a landscape of slavery.